1. On 23 November, 5.30pm, we departed from home  to Senai Airport in a rainy day. Upon arrival to KLIA, we met up with the group – Ken Air travel, led by a tour leader Mr William. After checking in at British Airway counter, we were expected to board at 0015 in flight-BA0034. However, there was a delay and we were given a RM15 voucher instantly to compensate for refreshment. Finally, we were on board. The inflight attendants were rather matured and mid-age Caucasian ladies, except 2 young pretty Asians. The inflight service was very lousy. After one round of ‘supper’, all the attendants were missing in action. We were told to pick our snacks from the pantry behind on our own. It was a long-haul of 14 hours direct to Heathrow airport, London. The inflight was dim and most passengers fall in deep sleeps. I encountered an Asian air-stewardess who advised me to have a glass of red wine, or take half tablets of ‘sleeping pill’ to go through the night. Otherwise, we would feel extremely lethargy upon arrival. She also gave me some cute soveniours of the airplane: mini wine bottles, mini cokes sets, etc.

2. We arrived the next morning (-MT-1300, London is 8 hours behind time-5.30am). It was pretty cold. We transited to a domestic British Airway to Zurich after 2-3 hours interval. It was winter. Everywhere was whitish. I viewed from the window, there was a bright sunlight, but our flight was above thick white cloud. I was speechless as the captain announced it was winter.

Finally, we touched down in Zurich. We met our coach for a short ride to Lucerne area with a picturesque postcard setting for the following two evenings. Lucerne was a scenic and typically Switzerland. The snowy roof top equivalent to a layer of icing on cakes. Wow, simply breathless and speechless. We stayed in Post Hotel and Casino Resort at Wigges. The room rate was SFr 240 per night.

3. On day three morning, we had our own self service breakfast in a corner room of this hotel. There was no waiter around. The portion of food were rather simple with limited choice. Bread, croissant, butter, cheese, etc. After breakfast, we departed to Engelberg. Along the way, I would help to keep snapping the picturesque sceneries. A thick layer of icing snow flooring was simply amazing. From far, I could feel the gigantic Alps mountain range were drawing nearer and nearer. We entered into the village of Engelberg, which was situated 3000 feet above sea level. We board the bucket cable car ride (SFr74) all the way to the top of the world- 10,000 feet above sea level at Mount Titlis. We had a good time enjoying the fun of making snow-men, castle-building, snow-ball throwing and also wandered in to the ice cave. Some guests relaxed over a cup of hot chocolate in the restaurant with panoramic views. We had our lunch (SFr14.80) on top of the ‘world’. The experience was simply awesome. After lunch, we returned to Lucerne to explore the old town on our own in search of local handicrafts, chocolates, Swiss watches or cuckoo clocks. All these retails outlets were small in size but very specialized in its products.
In the evening, we had dinner before going back to the hotel. 4. We spent a long time in coach on our fourth day as we departed to Paris very early in the morning after in-house breakfast. We traveled on Basel Barn Highway to Paris as early as 8.03am. We passed through Zurich Tunnel. The highway speed limit was 90kmh. Our tour leader told us Barn was the capital of Switzerland since 1848. About an hour later, we arrived the border check point. We exited Basel to enter boundary of France. No passport endorsement was required as we passed through the immigration. The route system was highly advanced. We stopped over a Petrol Kiosk to ease ourselves and had some snacks. The weather changed drastically. It was sunny misty. We continued our journey and had lunch at an R&R spot at around 1pm. We paid Frfranc40 (RM24.40) for a quarter-size roast chicken with a plate of half-cooked yellow rice. 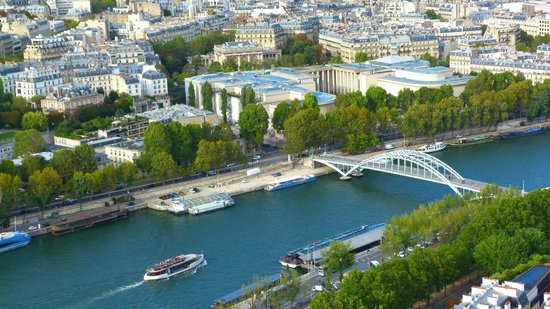 Finally, we reached the most exciting city in Europe- romantic Paris, the City of Lights in the late afternoon. We took an illumination tour on a cruise down River Seine. This river is 776km flowing from Southeast to Southwest. We could see a golden torch which was a copy of statue of liberty. At night, Paris is transformed into a sparkling germ. As it was winter, I noticed the street trees were blanketed with vast plastic sheets to keep away from frozen. What a thoughtful citizen who felt empathy towards the suffering of nature. We put up two nights in Holiday Inn Paris which was located about one hour and fifteen minutes away from the metro city. 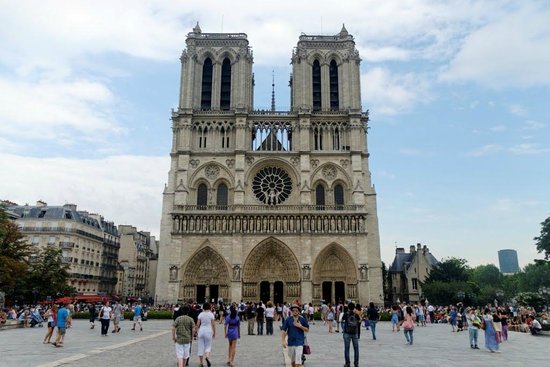 5. After a good rest, we started our day with Notre Dame, one of the most beautiful churches in the world and a master piece of medieval art. We completed our experience in this elegant city by visiting the Arc de Triomphe in La Defense, the Champ Elysees, the Place de la Concorde, the Palais de Chaillot, Trocadero gardens and Opera House and the Eiffel Tower. Eiffel tower was built in 1889. It stood at 320 meter high and weighed 7000 tons. It is repainted in every 7 years which takes 3 years to complete the painting task. Indeed, Paris is really live up to its name. Everyone should at least has ONCE visit in their life time. We had our dinner in a very tiny, cramp Chinese restaurant. Luckily it was winter. Otherwise, I would have soaked in heatedness and sweating like falling rain.

6. Saying bye to Paris in a chilling dark morning at 7.30am. We were going to travel for about 181km to Brussel, the capital of Belgium and stayed overnight in Amsterdam. Alas, our bus broke down as the engine was frozen due to coldness. While waiting, we strolled around and discovered some apple trees. We plucked some tiny dried apples for fun. We were delayed by three hours until another replacement bus came in at 10.22am. Along the way, we passed by many industrial zones. As we were very tired. We dozed off in the coach. Finally, we arrived Brussel at almost 2pm, just to visit the Atomium and the Chinese Pavillion as well as the Manneken Pis statue. We were treated a free Chinese cuisine for lunch to compensate of the delay of three hours this morning. In this typically Chinese architectural restaurant, I had a very nostalgic feeling like going back to ancient Chinese tradition. The food was very authentic and sumptuous. Later, we hurried up to move on to Amsterdam. We managed to visit Ratterman Dutch Clog Factory, an iconic element of Dutch. Dutch residents prefer to wear clogs because most of them are working as farmers in the damp moist agricultural farm. After the visit, we proceeded for dinner before checking into AC Restaurant Hotel.

7. We had a leisure trip this morning. We were taken on a cruise down the network of waterways in charming Amsterdam. We stopped for quite a long time at the Gassan Diamond Factory to see how diamonds are polished. we bought a diamond ring which cost us USD412. In the late afternoon, we took a short flight back to London. Upon touching down Heathrow airport, we were transferred to Cumbeland Oxford Hotel.

8. This morning, we toured London. Our city sights and monument tour of London covers Westminster Abbey, Big Ben, St Paul’s Cathedral, Houses of Parliament, Buckingham Palace, London Bridge, Marble Arch, Speakers’ Corner, Trafalgar Square and Number 10 Downing Street. After lunch, the day was free at leisure. We were delighted to window shop by the well-known Selfridges. Marks & Spencers, all along Oxford and Regent streets and world reknown Harrod’s in the Khights bridge area. We also strolled in Hyde Park and saw some elderly couples resting on the benches.
9. After breakfast, we headed for the airport for our home bound flight. We arrived KLIA after fourteen hours long-haul. The return trip only left 6 couples out of 24 guests. , We were told those who stayed behind were actually hunting for some odd jobs to earn a fortune. Anyhow, this trip to me was indeed an unforgettable memories of a great time in central Europe. I look forward to travel to other parts of Europe in near future.